If like me, you are a fan of ludicrous horror movies from the 80s, then you will surely know the cult classic B-movie masterpiece Killer Klowns from Outer Space.

If you haven’t seen it, please rectify it immediately because it is incredible. From The Chiodos Brothers, the film centers on the sleepy little town of Crescent Cove as the circus blows into town. Actually, the circus lands in town because these klowns are cosmic, and the Big Top is their transport.

That’s right; the film does exactly what it says in the title: offering murderous, miming marauders from space descending on the small town to cocoon everyone in candy floss and harvests them for food.

What has this got to do with games, you ask? Well, Killer Klowns is getting gamified. Horror properties like Friday the 13th and Evil Dead, as well as Dead by Daylight, started the trend of suddenly getting video game adaptations. With The Chiodos Brothers’ involvement, the Killer Klowns IP is becoming an asymmetrical multiplayer horror. The game was announced earlier this year at Gamescom Opening Night Live.

You can play as one of the eponymous clowns with an arsenal of weird and wacky weapons. Or, you can play as a resident of Crescent Cove attempting to thwart the invasion. So prepare to step right up for a night at the circus with some less-than-friendly beings. There are five klowns to choose from, each with different talents to help you decimate the cliché 80s horror movie town. Let’s take a look at each one and what they will have to offer.

Who Are The Playable Killer Klowns?

Jumbo is a Scout class and is described as a jack of all trades. His attack can hit five humans at once, and he also has an ability/item called Finger Lure, which can draw in opponents. Shorty is the Fighter, with higher speed and strength. He is the One Punch Man of the crew, carries a Cotton Candy C4 Launcher, and can chase down civilians on his tricycle. Finally, the klown’s Tank is Chubby, who has Unstoppable Rage and can break through barriers. He also carries pies that incapacitate humans with a single bite. 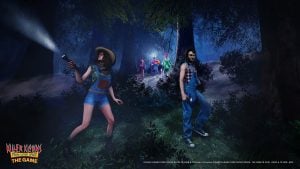 Spikey is the Tracker, slow, but with a trusty Balloon Dog Bloodhound, Popcorn bazooka, and invisible car, there’s no escaping him. Finally, Rudy is the Trapster with traps like Popcorn Mines and creepy Jack-in-the-Box to slow down enemies. There is also an AI-controlled klown class called the Lackeys, which will alert the players to human locations by releasing rainbow confetti and taking cocooned enemies back to the ship.

The Five Human Classes in Killer Klowns From Outer Space: The Game

Not to be outdone, humans also have five classes. The Biker is ironically slow but the strongest option. The Cop appears to be the all-rounder of the group. Redneck is the weapons specialist. Punks are quick and melee-focused fighters. Finally, Teens are speedy and sneaky.

As the human crew, it’s your job to defeat the invasion and take back the town from the encroaching comical cosmic calamity. 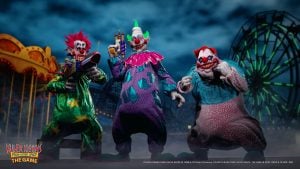 As for gameplay, studio Teravision Games describes it as PvPvE. The klowns will operate in a team of three players. The humans get seven players, meaning as the klowns, you must pick which attributes will help you most carefully. Meanwhile, humans can double up on some classes to level the playing field. Regarding the location of the epic battles for the candy-coated Crescent Cove citizens, several maps will be available post-launch. Still, there has only been a glimpse at the circus’s exterior and interior. The maps will also be randomized for each match and have different dynamic objectives to keep things interesting.

What Is The Release Date For Killer Klowns From Outer Space: The Game?

That sums up what we know so far about the game. Additionally, a soundtrack by Jonathan Massari is currently being recorded.

When can you play Killer Klowns, though? A sign-up for a closed Beta is available on the game’s website.

There is no official release date, but we have a timeframe. The game will launch in early 2023 for PC, PS4, PS5, and Xbox.