Oh, Caldera… There’s something about Warzone 1 that keeps me returning to this game. With Warzone 2 being the main focus for developers, it’s safe to say that the meta for the first Warzone is set in stone. So let us help you dominate Caldera with our definitive Warzone Caldera loadout guide.

It’s been over 90 days since the last weapon balancing update. With Warzone 2 taking all of the developer’s time and attention, it’s safe to say the first Warzone’s meta is here to stay. For the most part, everything is well-balanced right now.

I grew a little tired of the slow playstyle of Warzone 2 and went back to Caldera this week to see how it’s holding up. I’ll admit that I had a lot of fun. Currently, there are plenty of weapons we can use from all three titles. Modern Warfare 2019, Cold War, and Vanguard all bring something to the table.

So, what are the final meta weapons, perks, and equipment you should use? Well, let’s break that down.

There have been a lot of changes to the perk system, from Ghost being nerfed to the rise and fall of the EOD perk. There are a few choices to fit every playstyle, but there are plenty of perks you’ll want to ignore entirely. 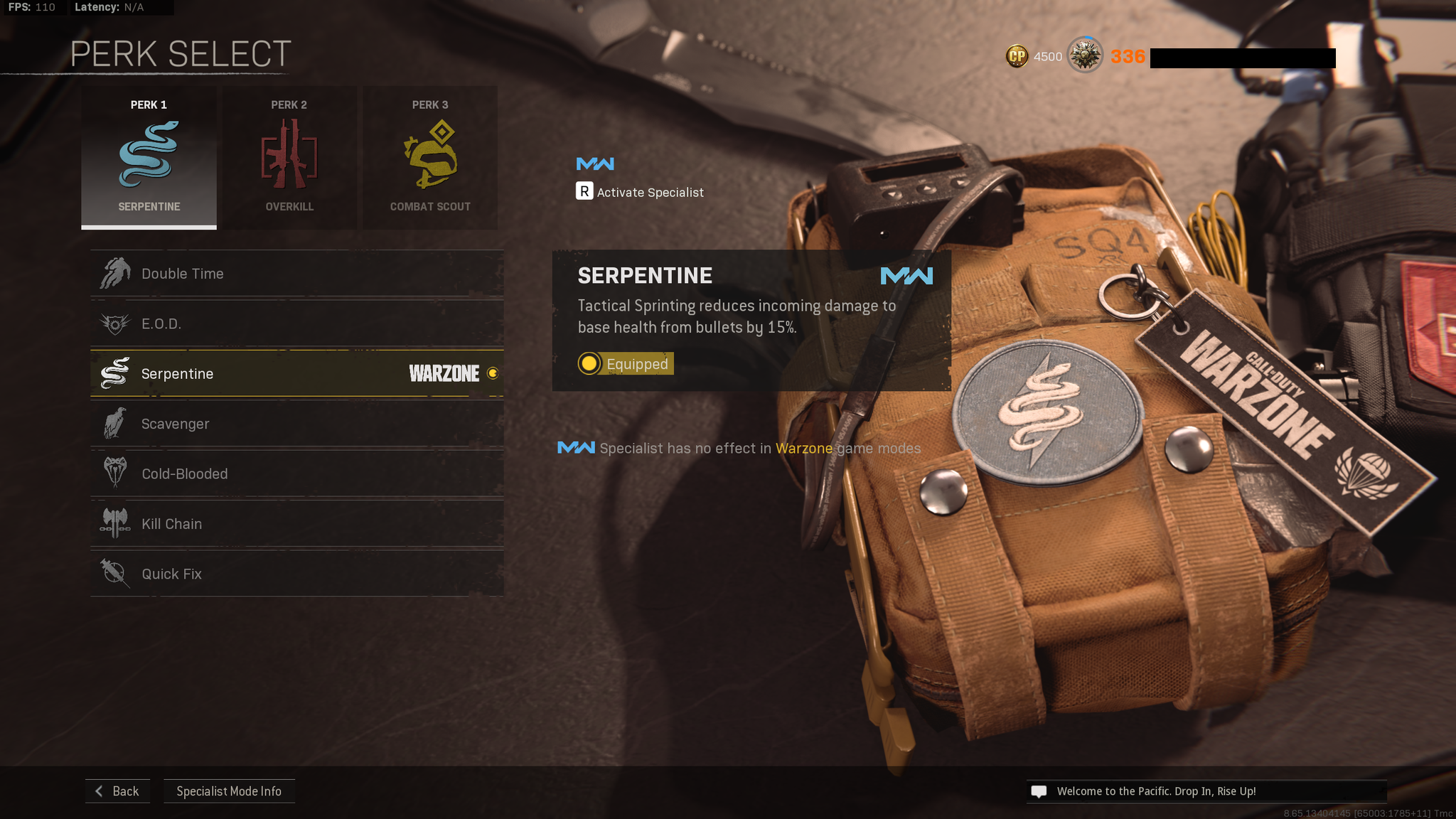 In the blue perk category, we’ve got a few options. When Rebirth Island and Fortunes keep were a thing, the Double Time and Quick Fix perks saw significant use. These days on the bigger map, I would recommend either Serpentine or Cold-Blooded. Serpentine is a nightmare at longer-range fights giving you a damage reduction when sprinting, which could very well be the difference between life and death. Cold-Blooded helps combat one of the most used yellow perks in the game while also keeping you off of rarely used Thermal Scopes. 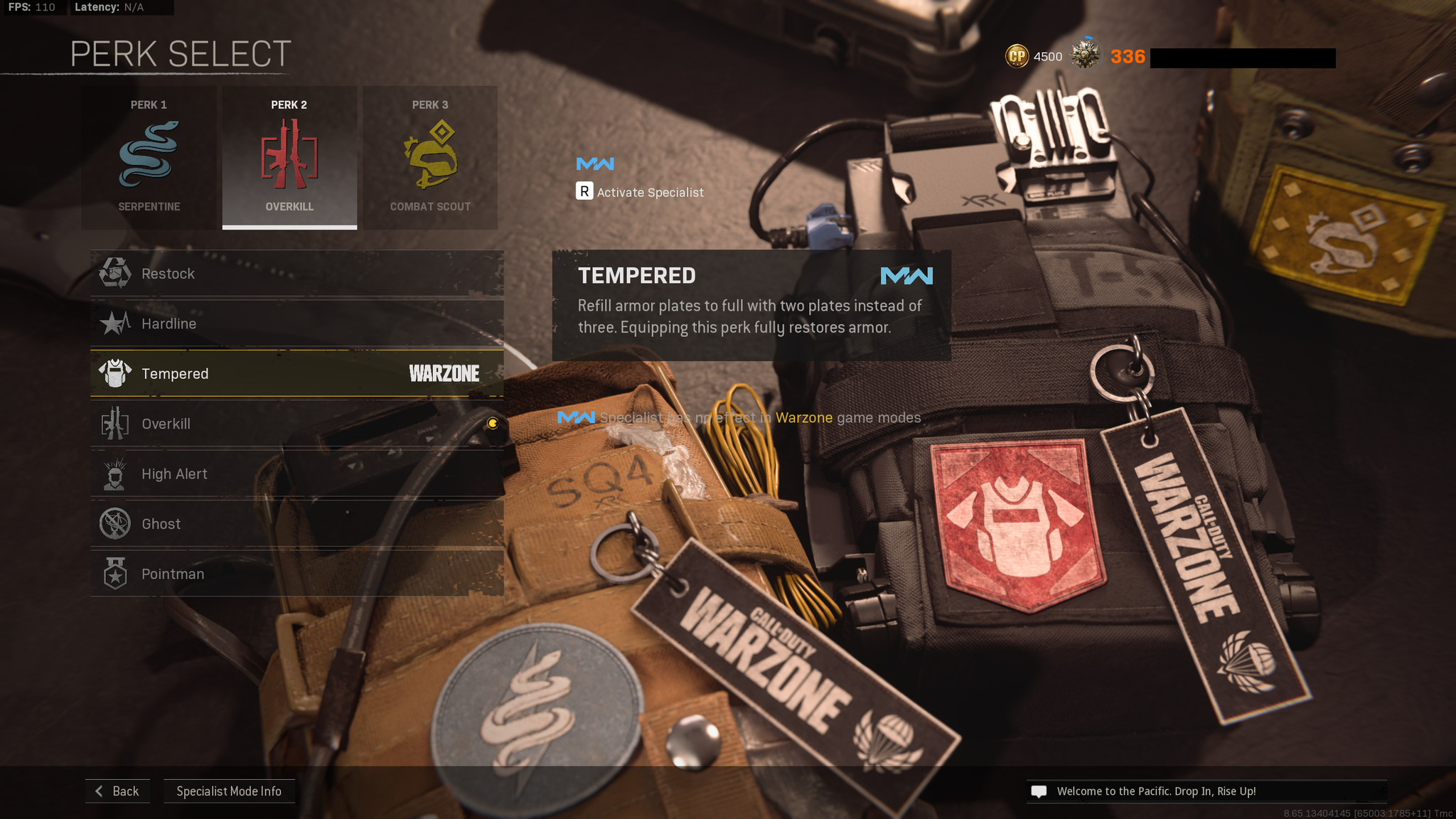 The most common red perk you’ll be using is Overkill. Having two loadout guns is what 72% of players are rocking as their first loadout choice. But when going for a second loadout, what should you get? Well, we have a few good options. I wouldn’t recommend Ghost anymore, as you must constantly move to gain its effect, and Heartbeat sensors are at an all-time low. Restock with Snapshot grenades and Semtex is a strong choice. When playing quads, we like to have one person on our team with this perk. It makes pushing unknown areas all the easier. We’ll want to run Tempered for aggressive players like myself. Using only two plates to be at full health is more substantial than you initially thought. You can plate 33% faster to get back into the fight and use fewer plates in each encounter. 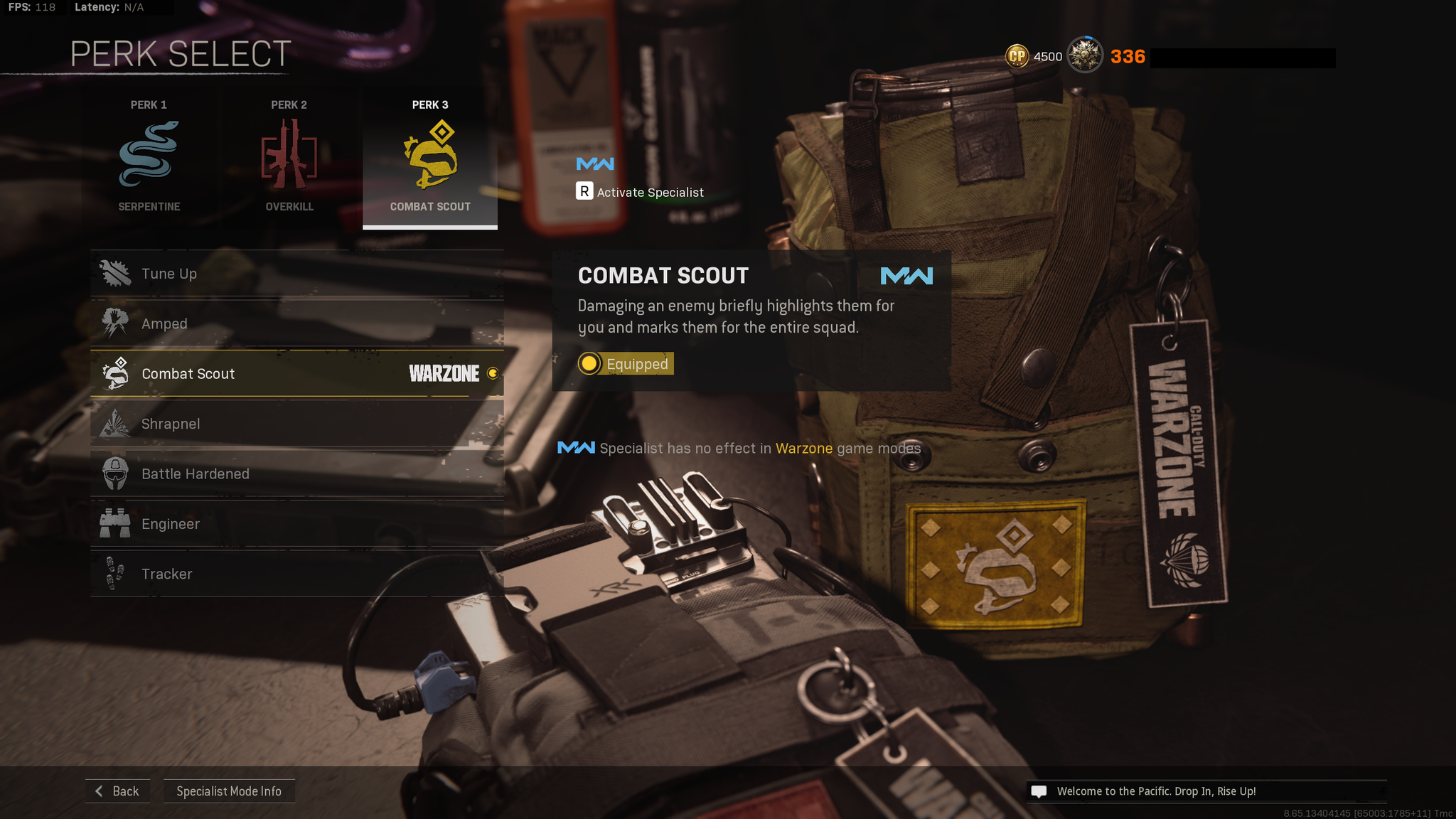 Finally, we have the yellow perk, with only two options. You can’t go wrong with either one, so pick Combat Scout or Amped. Combat Scout will live ping your enemy with every bullet that lands on them. This makes it easy to track moving targets you might lose sight of as they push into bushes and buildings. Amped lets you switch between your weapons at lightning speed which will help in close-quarter combat if you need to change weapons instead of reloading or have the wrong gun out in case of an unexpected encounter.

The Right Equipment Turns the Battle 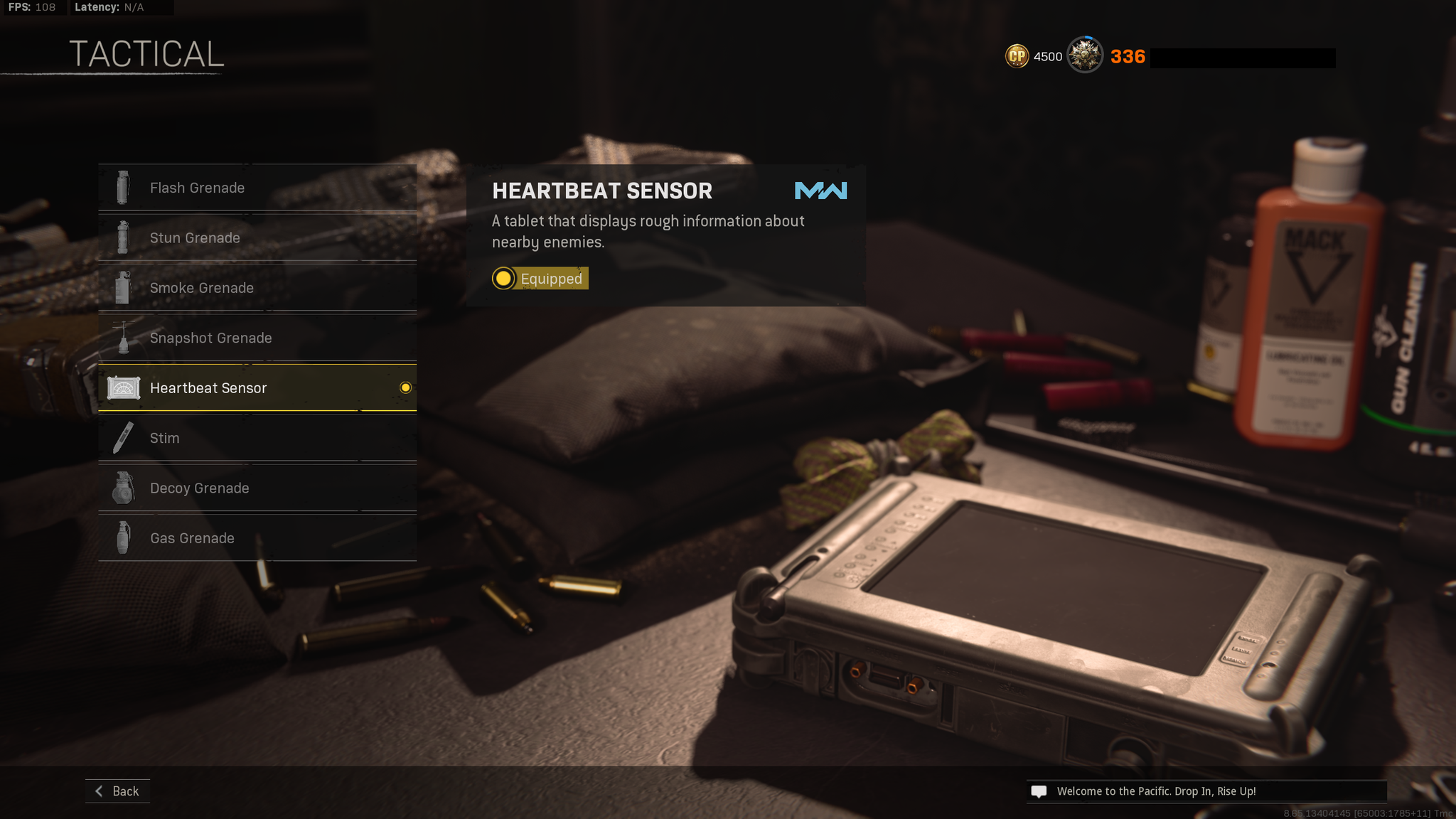 When making your loadout, you get two choices: a tactical and a lethal option.

For tactical, you have three excellent options. If you’re going to restock, we recommend the aforementioned snapshot grenades. Otherwise, Stims will help you get back into the fight faster and make some aggressive pushes at full health. Finally, if neither of these fancy you, run the heartbeat sensor. Just remember your squad only needs one or two people to fill this role!

As for lethal options, we’ve got two choices. The aggressive players will want throwing knives to finish their downed enemies. Keeping more bullets in your gun means you’re ready to continue the fight without reloading. Everyone else can use Semtex to deal massive damage to groups of enemies or someone hiding in a building.

The Top Five Secondary Weapons in the Game

You can use many secondary weapons, but only five can reach the top. So we’re spending this part of our definitive Warzone Caldera loadout guide looking at all the submachine guns, shotguns, and pistols to see what you should run.

The Best Weapon To Run In Your Non-Overkill Slot 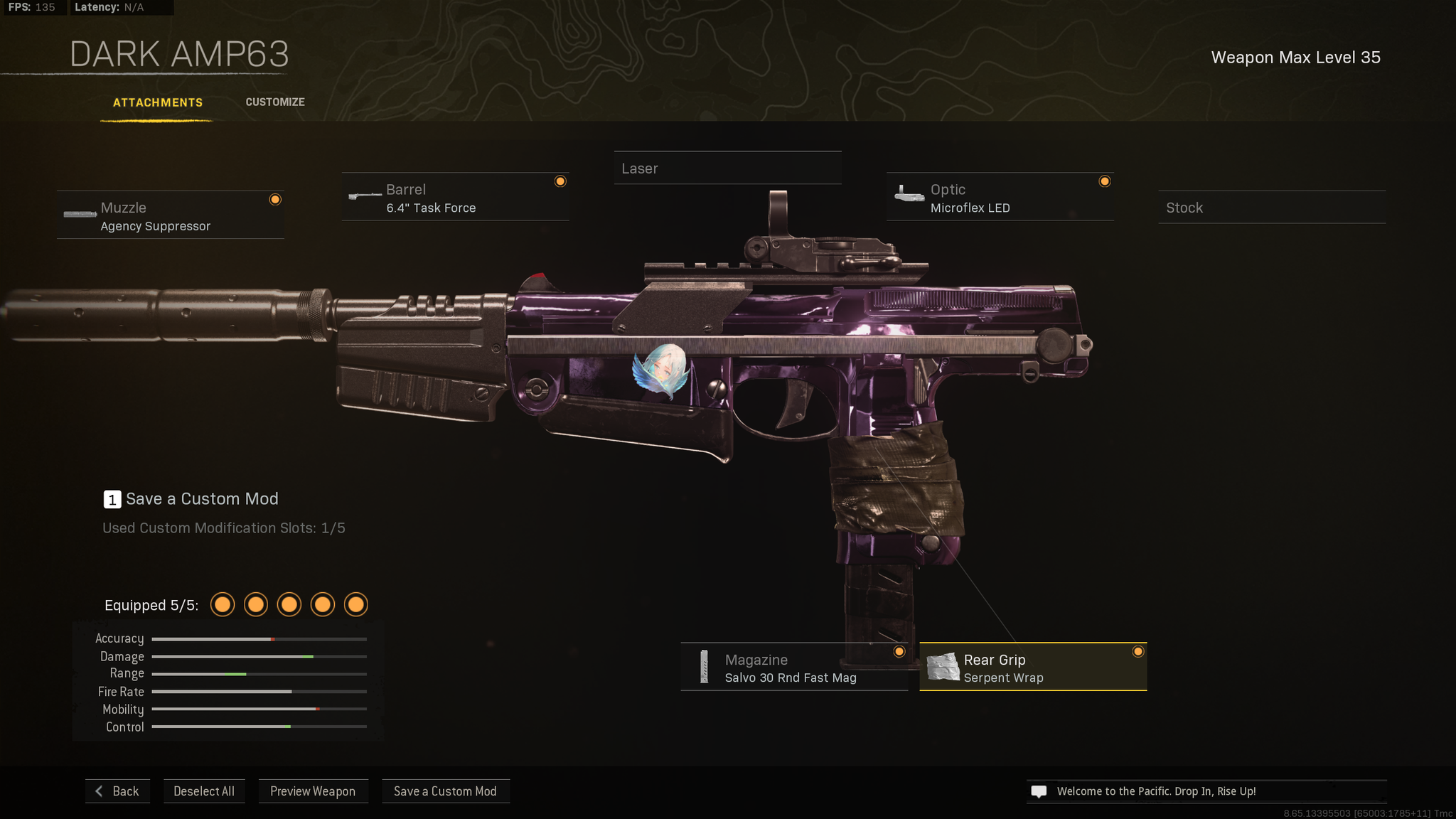 We’ve got three weapon categories to choose from for this slot.

Launchers and melee are not useable to most players, so we’re left with pistols. While there are plenty of “useable” options like the Akimbo M19s, the Diamatti, and Full auto 1911s, only one climbs to the top, in our opinion.

The single AMP63 is a fully automatic pistol with a 30-round magazine. The Modern Warfare Sykov just doesn’t hit the same, and the 80-round drum magazine makes you move at a glacial speed. While the pistol won’t un-gun most SMGs. The plan is to kill them and trade your pistol for their SMG.

The Best Shotgun in the Game 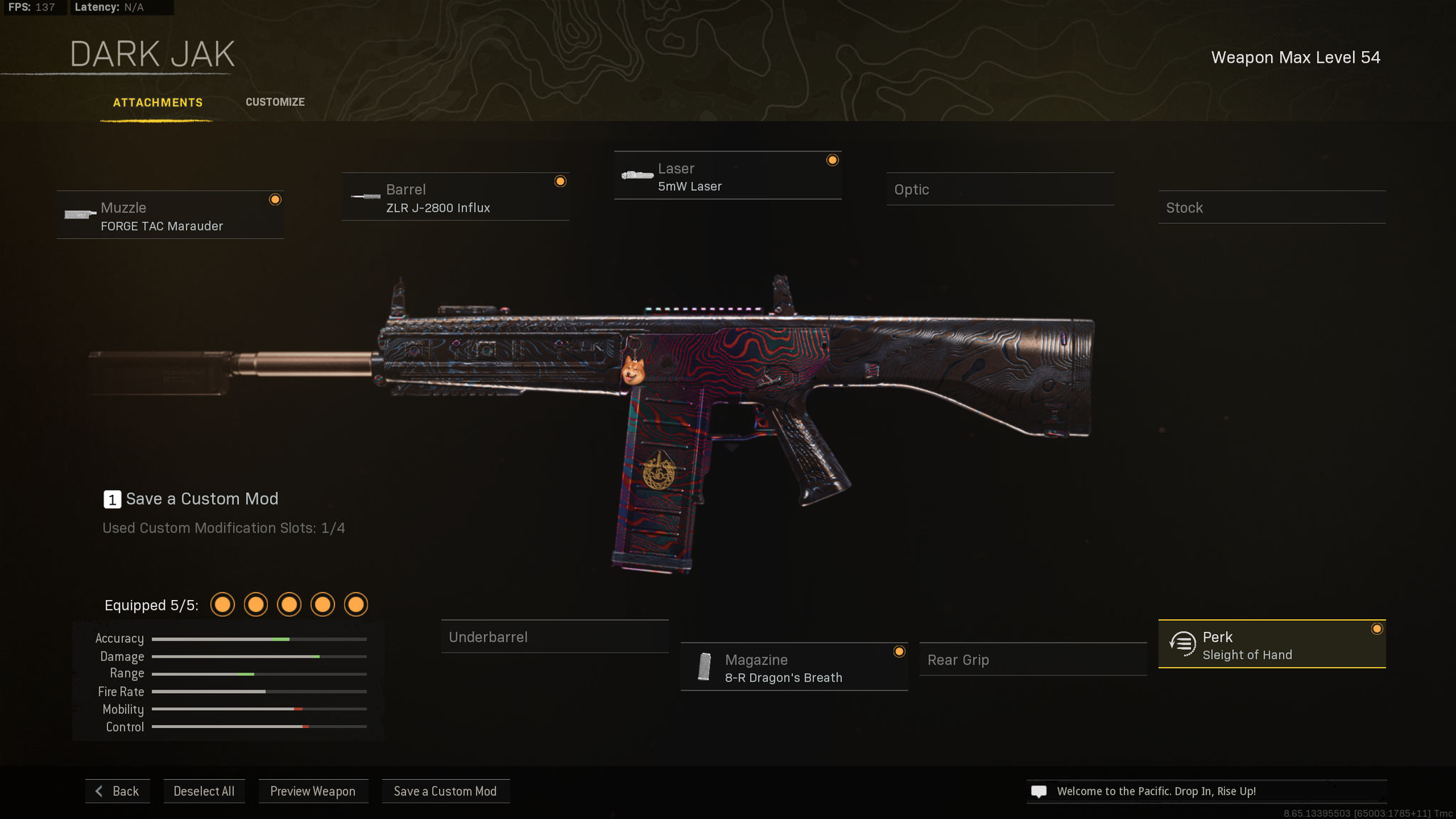 We’ve had a lot of fun shotgun metas in Warzone. From the Origin shotgun instant deleting someone in Verdansk to the infamous Doof-Doof R9-0 with incendiary rounds. But one rose to the top as the dust settled and many nerfs occurred.

The Jak-12 shotgun is the recommended shotgun in our definitive Warzone Caldera loadout guide. The full-auto powerhouse can wreck your opponents in close-quarters combat. I used to use this thing all the time on Rebirth Island, to the dismay of my enemy. If you want to really feel something, give this setup a try.

SMGs for the Rest of Us

There are a few Assault Rifles you could put into the secondary category (AS-Val, FFAR, etc.) For the most part, however, these top three Submachine guns are the better option. So let’s spend the following sections of our definitive Warzone Caldera loadout guide ranking the top three SMGs. 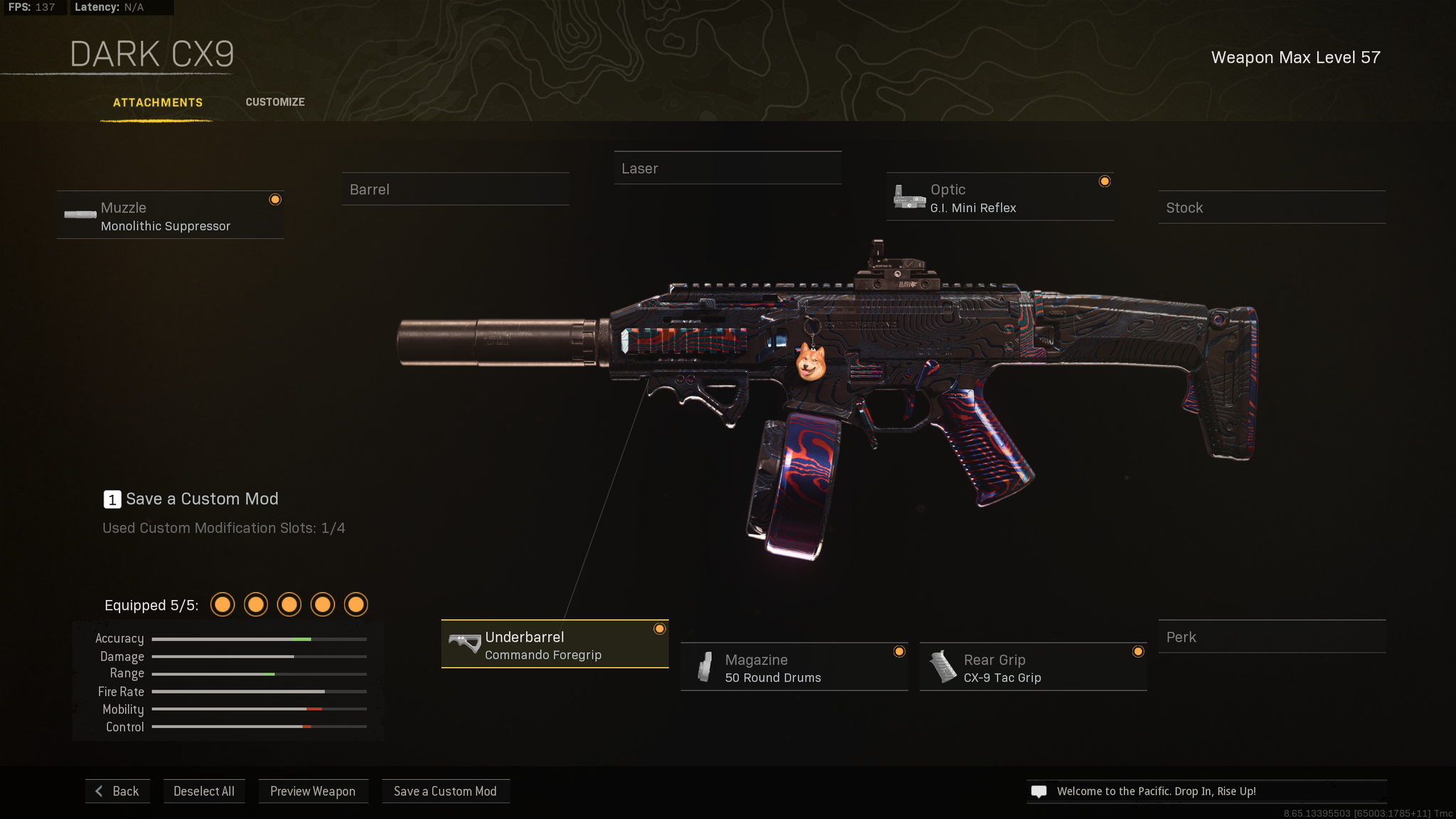 This is a weapon that has grown on me. While it may not be as fast or snappy as any Vanguard option, it has an insane fire rate of over 1000 rpm. Pair this with Sleight of Hand, and you have a less than one-second reload time with a 50-round magazine. So if you want to try something over than a Vanguard option, this is the only gun you’ll need. 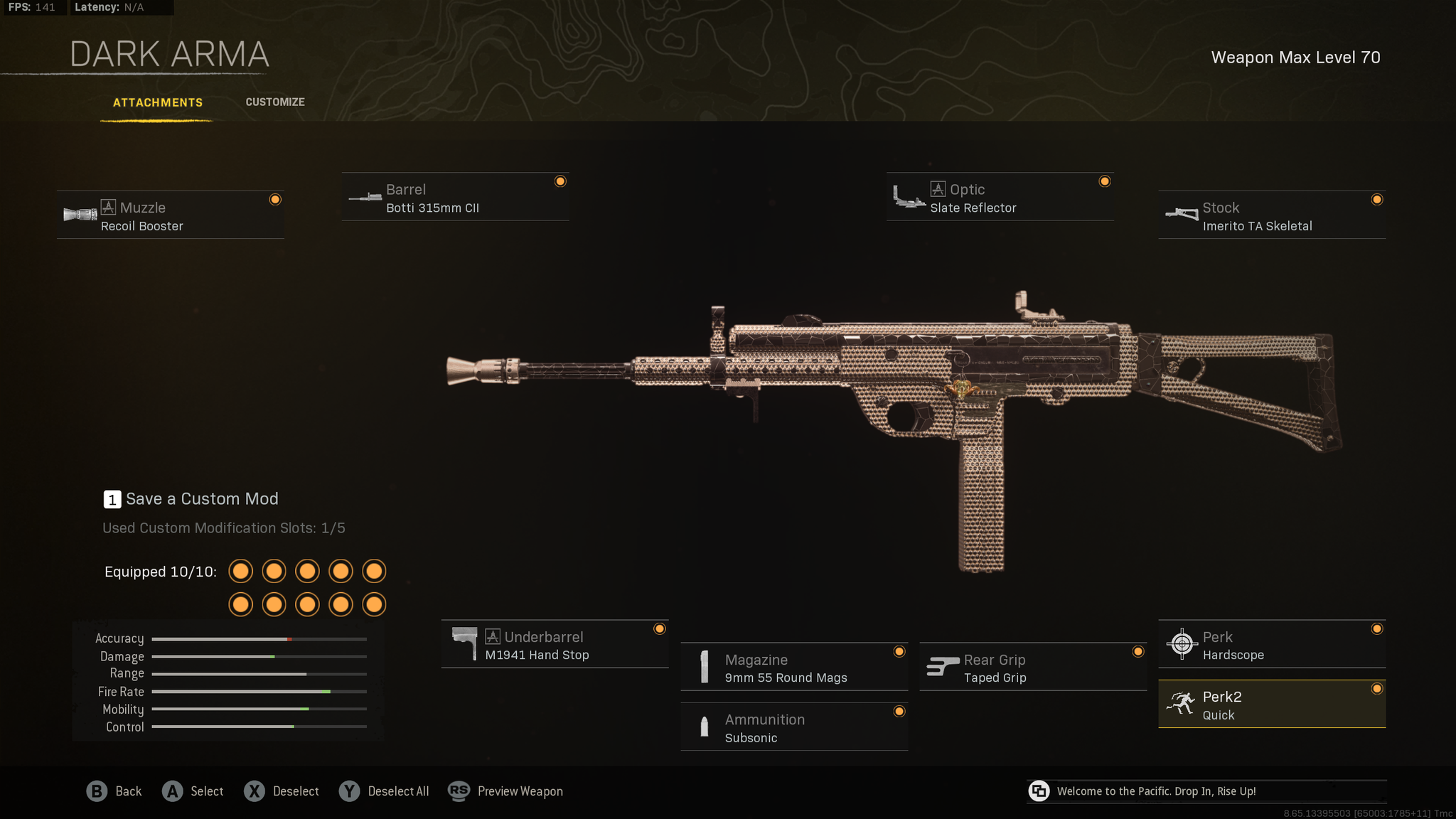 If you’ve played any amount of Warzone Caldera in the past year, no doubt you’ve seen both streamers and casuals alike rocking this SMG. With a speedy time to kill and a 55-round magazine, it’s no wonder why! There are two ways to build this gun. The more popular strafe speed build is a real contender. You’ll be able to strafe side to side faster, and your opponents will be unable to keep up.

However, if you want more recoil control, try the loadout I recommend below. It won’t let you down!

The Final Submachine Gun, the Marco 5 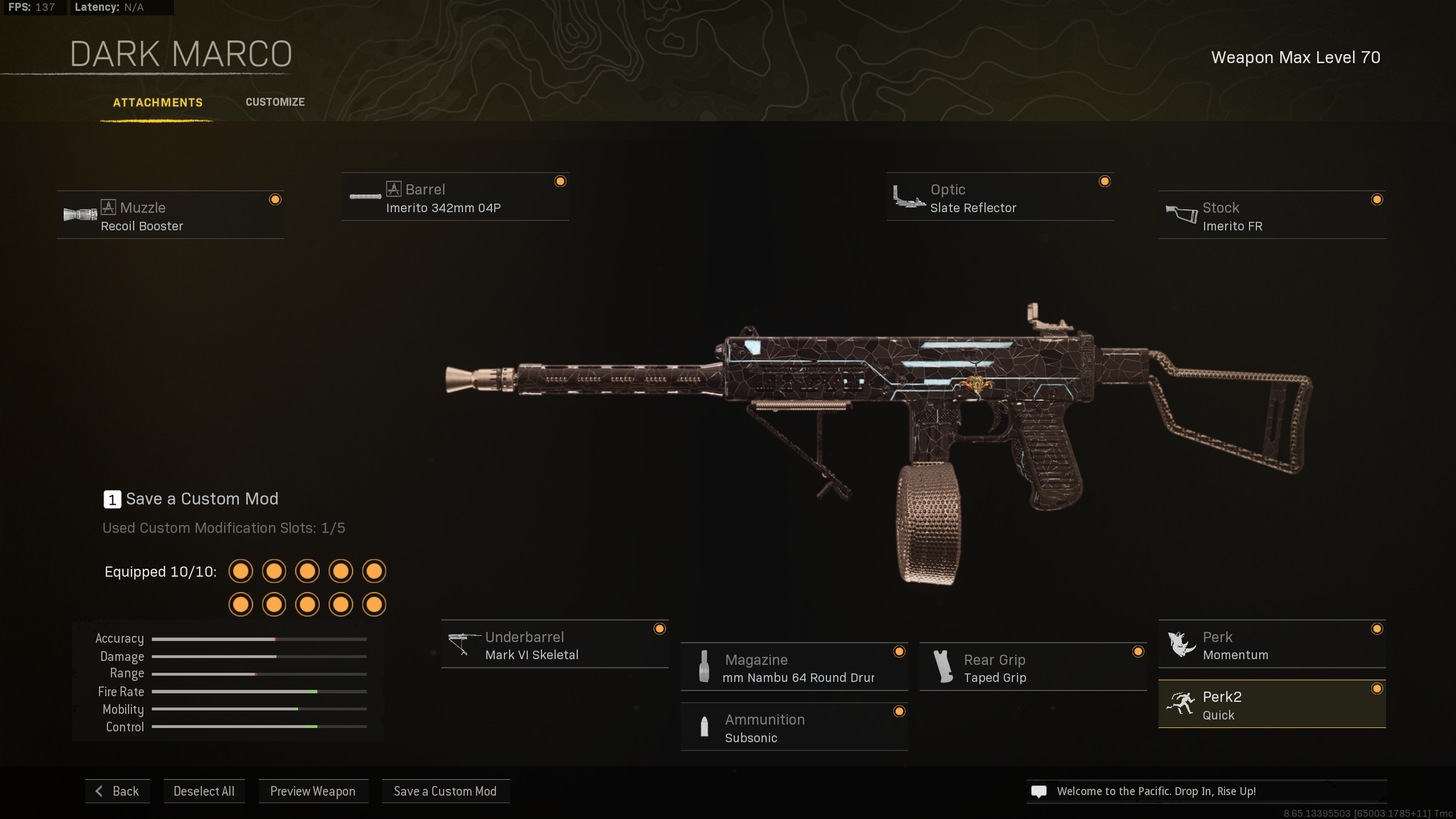 Specifically, the Marco is the perfect balance of stopping power plus ease of use. I’m not lying when I say this Marco build has zero recoil. Anyone can use this gun with extreme success, and it’s in six of my warzone classes. So if you want the best option in the game, look no further.

There have been so many memorable long-range metas in both Warzone and Caldera. From the Original M4A1 vs. Grau debate. To the Single fire Cold War metas with the DMR and AUG. And the un-killable Bren that lasted several seasons during Vanguard, But what has survived and is good now? Well, we have a lot of options. The final meta is wide open, and it’s hard to say for sure with so many guns available to us. But these five are slightly a cut above the rest and will lead you to many Warzone Victories. The following sections of our definitive Warzone Caldera loadout guide will discuss the sniper, LMG, and Assault Rifle slots.

The Best Sniper in the Game 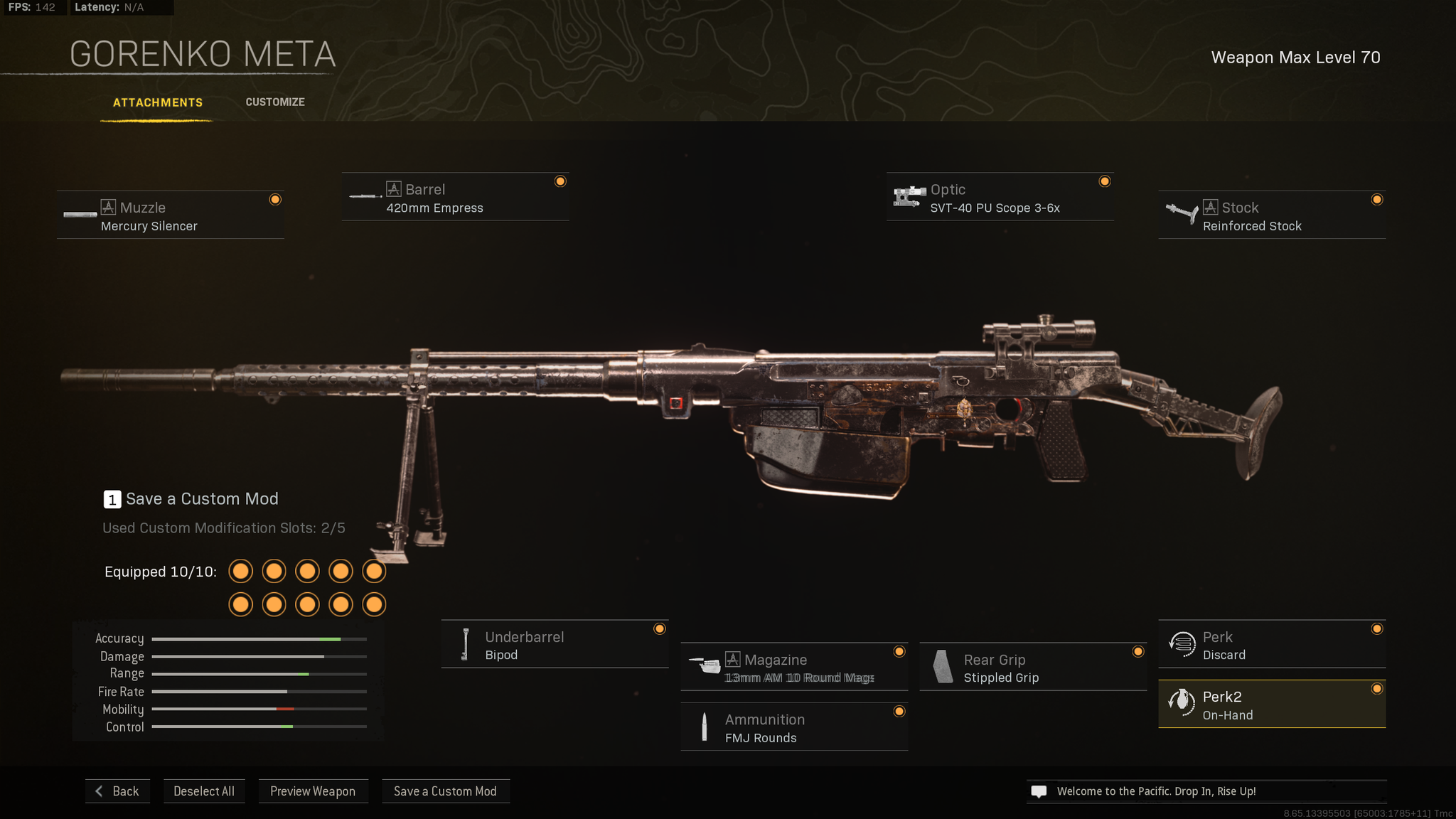 Back in September, I wrote about the best sniper in the game. Flash forward to January, and it’s still the best. Of course, we’re talking about the Gorenko Anti-Tank Rifle.

When the huge sniper update occurred during the summer last year, all “light” snipers that used to rule the day were suddenly cut down. The Kar98k or the Swiss one-shot headshot could no longer keep pace, and we were left with the heavy snipers taking the reigns. People tried to bring back the HDR from its glory days, but those are simply a thing of the past. The ZRG is fine, but we can do much better than satisfactory.

Meet the Gorenko. You can fire this thing almost as fast as a marksman rifle. After one headshot or two quick body shots, your opponent is down for the count.

The Best Light Machine Gun in the Game 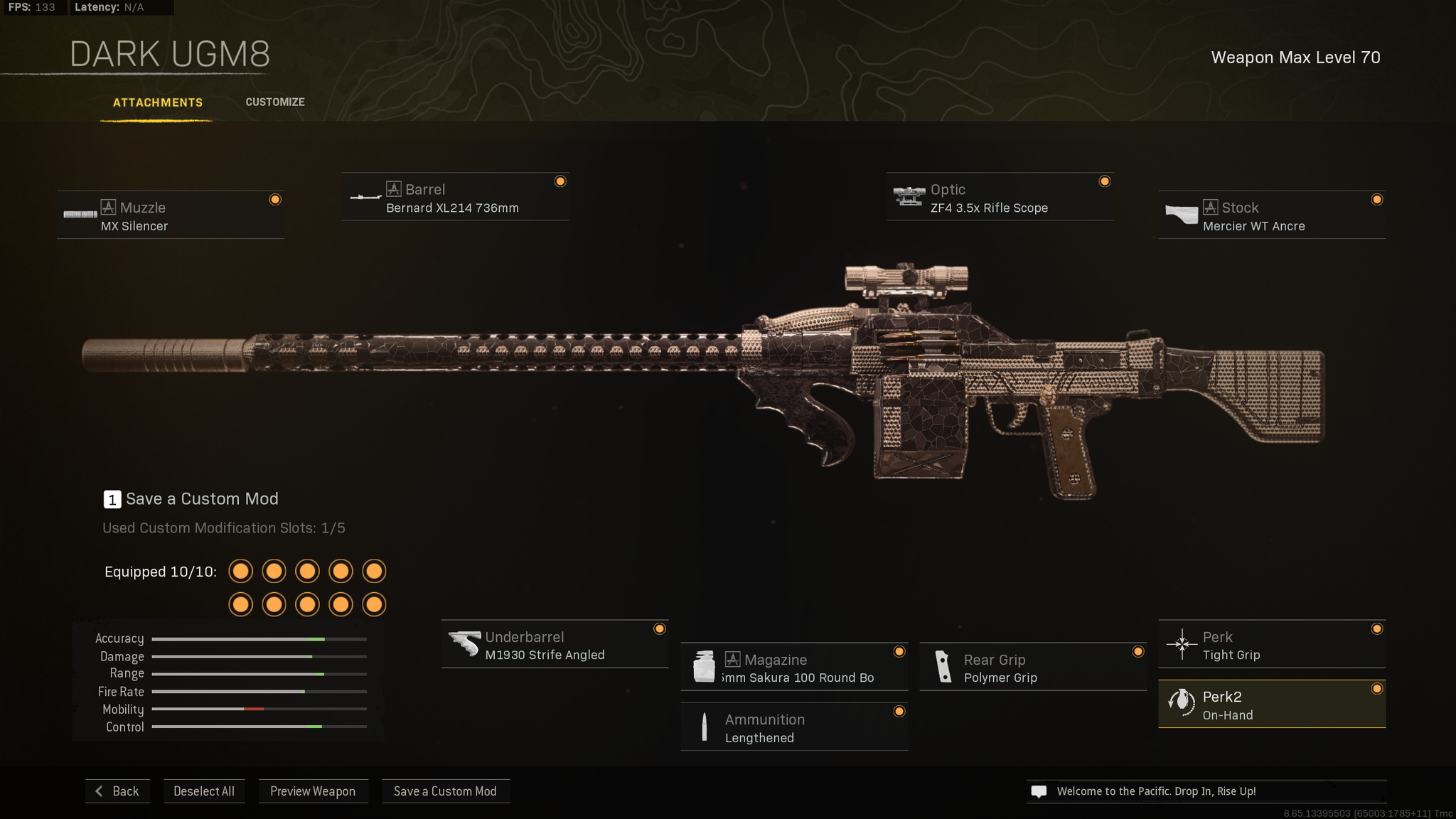 We’ve had plenty of Light Machine Gun metas. From the original Bruen tearing apart Verdansk. To the Zero recoil MG82 that could beam someone 300 meters away. We’ve had some solid options for people seeking more firepower than an Assault Rifle can offer.

But after many nerfs and meta shifts, one gun has survived: the UGM-8. When it was released, it was being used as a meta contender. And after a few guns lost their time in the spotlight, the UGM-8 never left the scene. Despite a few nerfs here and there, it’s still a solid option, as it’s still being picked today. Our Definitive Warzone Caldera loadout guide recommends this gun if you prefer a heavy gun with stopping power and a huge magazine. 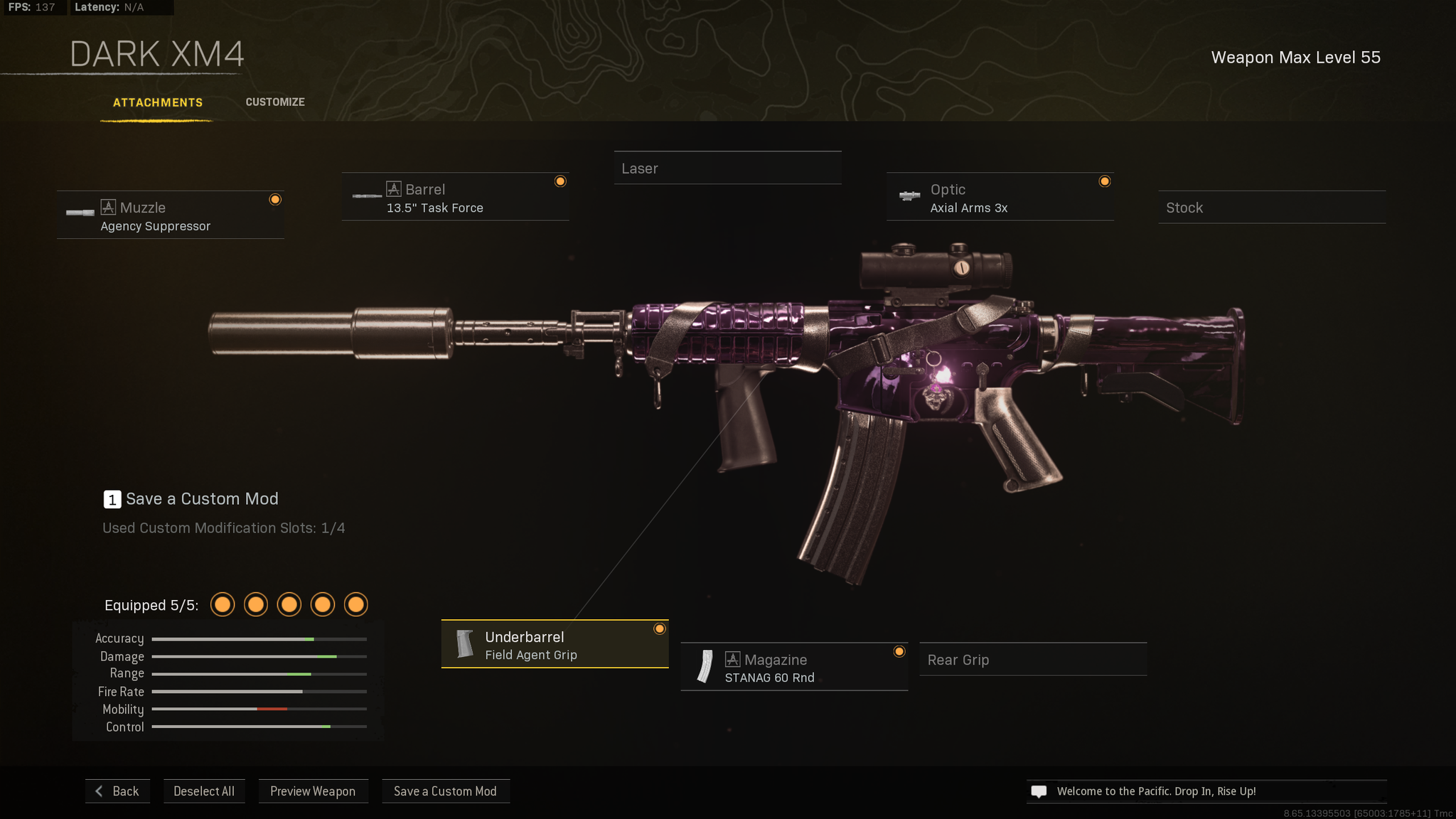 Kicking off this list is the gun many streamers have been using. It’s been up and down, but it never got pushed out of the meta. And that gun is the XM4. While relatively easy to use, I personally find this gun a bit “bouncy” in its recoil pattern. It might take you a few sessions to get used to, but this is one of the most popular guns for a reason. Give this setup a try if this all sounds good to you. 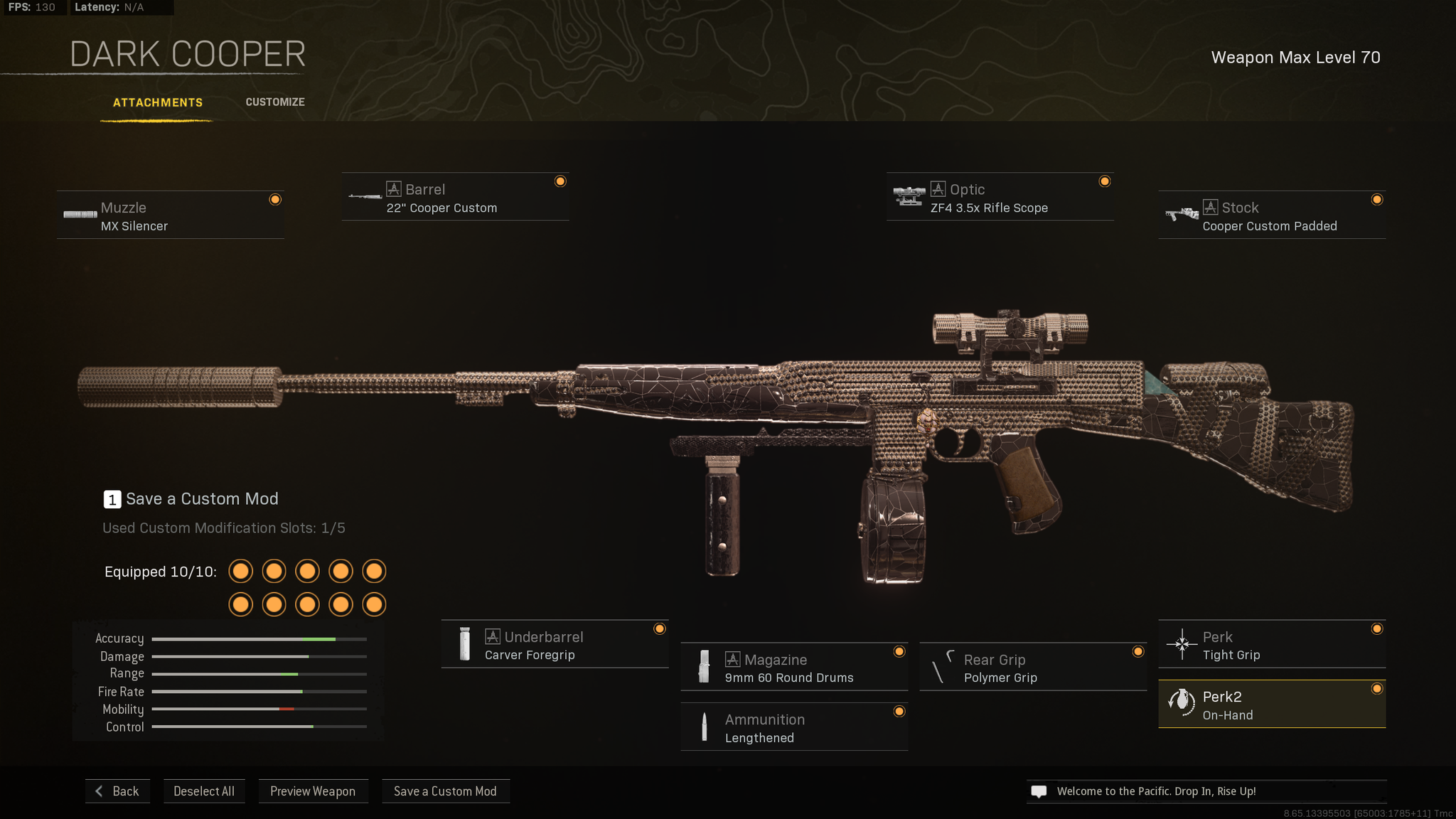 The Copper Carbine went from best to worst and back to great again during the Vanguard integration. So if you liked the no-recoil days of the Kilo and Krig, this is the gun that’s almost like it these days.

Until the final rebalancing act, the Automaton probably took this gun’s spot. After that, however, this sneaks ahead in pick percentage (11% of all guns picked) and ease of use. Of course, it will take you more bullets on average to fully kill a distant opponent, the trade-off of low recoil. But the compressed rounds are something to try if you want something that kills much faster. 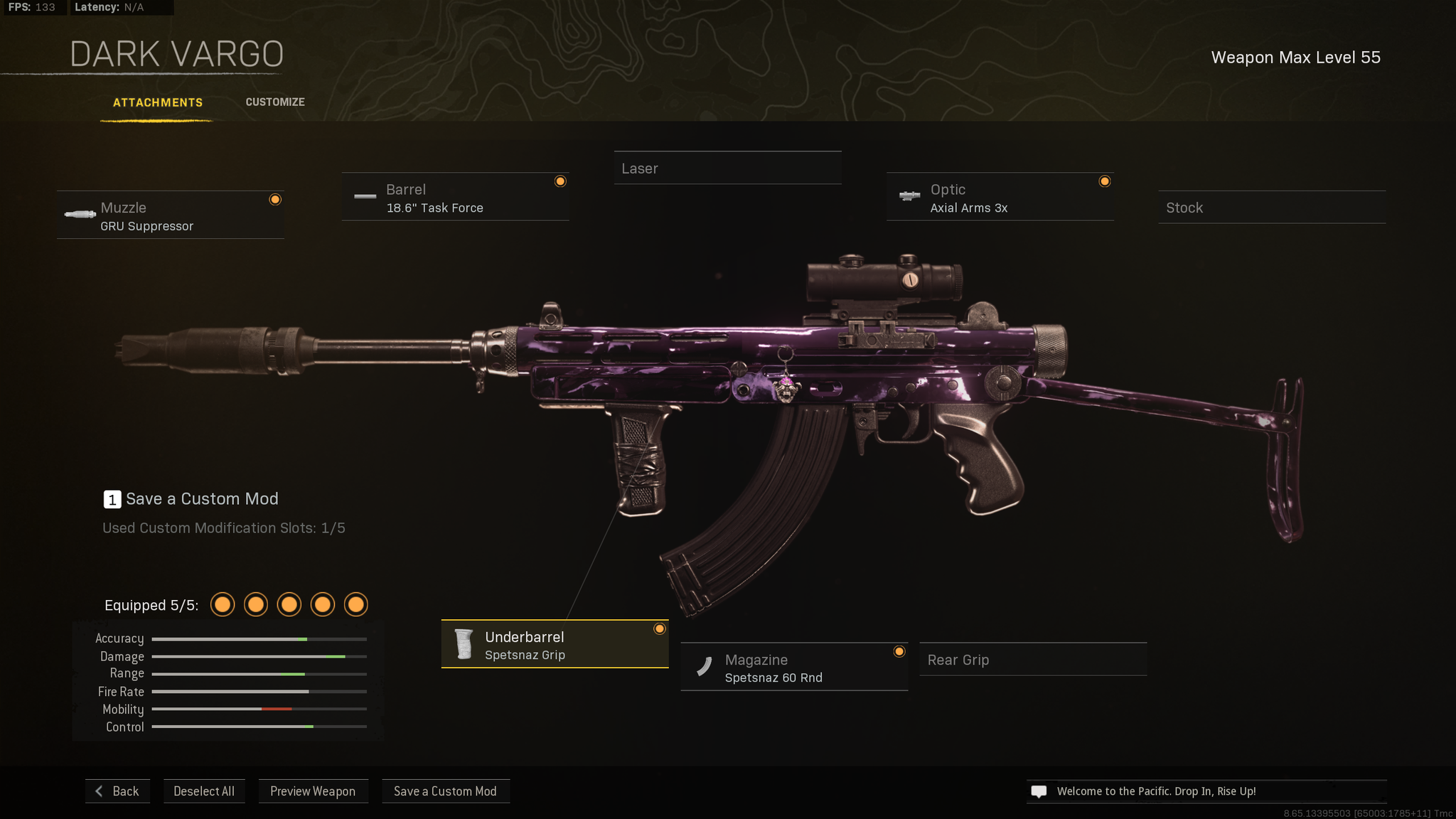 Finally, we’re rounding out our definitive Warzone Caldera loadout guide with one of the most popular weapons in Warzone: the Vargo 52 from Cold War.

I didn’t like this gun when it first launched in Season 2. The recoil pattern was wonky, sure, but it did enough damage. But it was overshadowed by the Krig and every broken meta we had in the Cold War integration. These days, it got a buff to its recoil pattern, and it’s my favorite gun to run right now. The best part is, if you don’t have this gun leveled, there’s already a bundle in the store with the exact meta-build attachments. I’m not saying you should drop money on Call of Duty Bundles, but the option is on the table if you’re looking to get into the game immediately.

While there are thirty other guns I’d love to talk about in this end-all, be-all definitive Warzone Caldera loadout guide, we’ll have to cut it there.

If you use any of the ten guns talked about in this guide, you’ll be off to a great start in Caldera. So give these setups a try, and let me know what you think in the comments below!