What do you do when the world you know begins to crumble and malfunction around you? The home that you love is all gone. Well, you chat with the sentient ship you live on, then go on an adventure through the almost abandoned decks blasting little goopy guys! Yes, this is the world of Whalien, and it is a world of pure delight.

Developed and published by Forbidden Folds, Whalien is a family-friendly adventure where you play as Ernest Hemingwhale (there are A LOT of fishy fun puns), a remaining resident aboard the sentient whale ship Fin. Fin is the ship’s AI, and something is definitely wrong under the surface. Weird little goopy guys called Squiddies have infested every corner of his inner workings, and only you can get rid of them. You also have to contend with the ships Spring people, who seem to be the only ones left on board.

Yes, they are springs with heads; the only way to interact with them is to smack them with your push-and-pull powers.

A brightly colored world awaits you as you don your push-and-pull gloves and use them to solve puzzles, help spring people, and explode goopy little insurgents clogging up Fin. It’s a bit like the anti-Slime Rancher. Nobody wants these slimes; they must be demolished. With your right hand, you can basically Force push things and slimes out of the way while your left hand can pull things towards you. Both have quite a short range until you unlock my new favorite monikered weapons, Mr. Push and Mrs. Pull.

Mr. Push and Mrs. Pull are massive pearls discovered by scientists and very imaginatively named after what they can do. Both integrate with their corresponding gloves and can create an AOE push or pull effect. This way, you can easily explode large areas of gummed-up mechanics and rearrange the environment.

Speaking of environments, there are lots of very strange and fun environments to explore on your mission. For example, there’s a sea shanty village filled with spring people. You’ll also find random shops with oddities: skateboards, giant candy, overly starched t-shirts, and more.

Part puzzler and part platformer, Whalien balances its gameplay well and has a wonderful sense of humor. As you go around the ship, you collect stickers that tell the story of humans, how they ended up living aboard Fin and where the Squiddies came from. Characters speak in a sort of Simlish language, but all have distinctive voices. Ernest rumbles his way through conversations, while Fin sounds like a 4-year-old child. There’s a meeting of art styles that brings a child’s educational cartoon show from the late 90s and the squishy-looking 3D styling of games like Fall Guys and Splatoon. 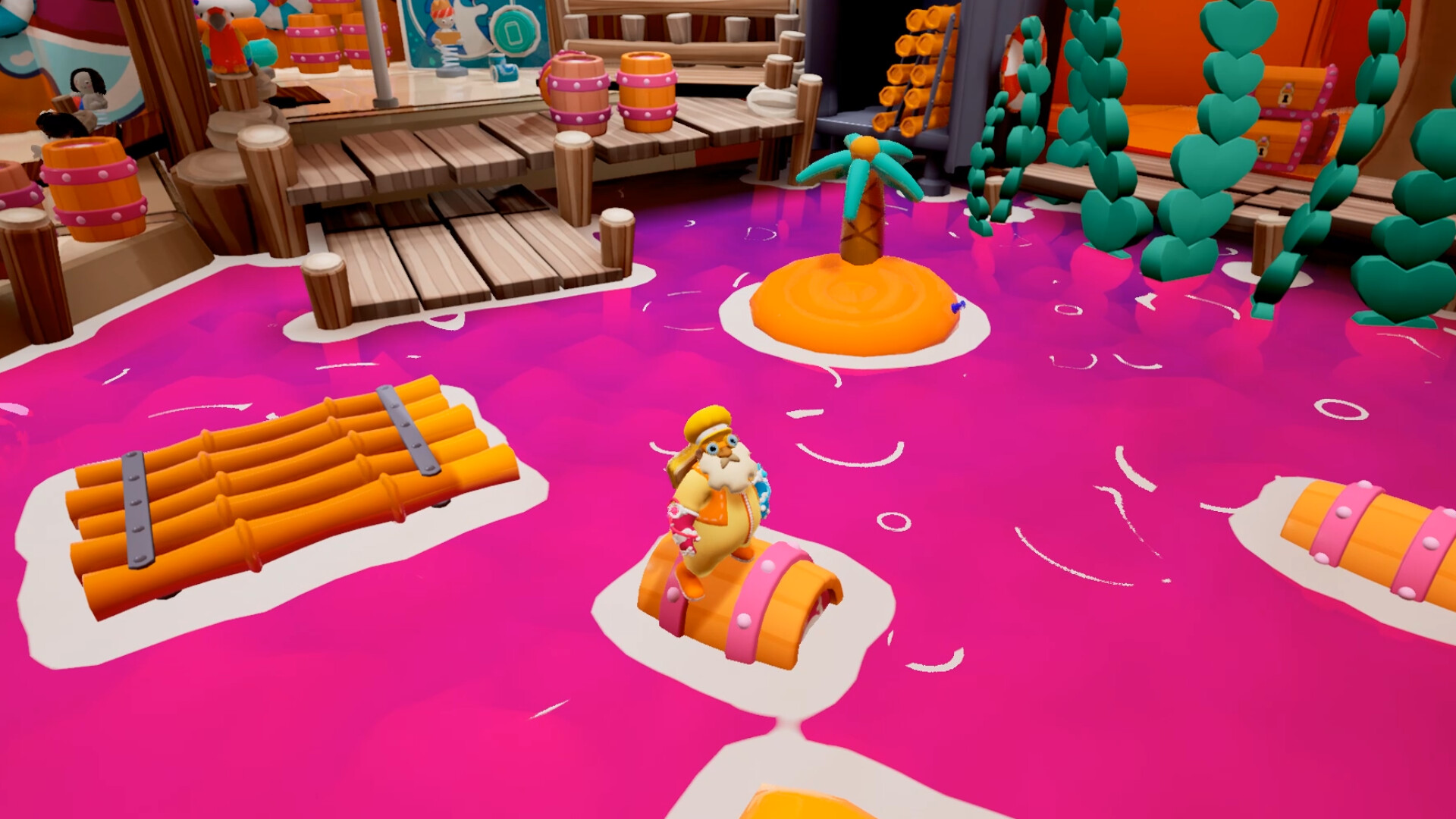 Whalien isn’t a long or particularly difficult game. There’s just enough challenge in the mechanics to remain interesting. Couple that with the genuinely delightful environments and endearing characters, and Whalien is truly a game for all the family. Older kids will have no problems with the gameplay. Heck,  I’m pretty sure my 10-year-old niece would navigate this with relative ease. The grown-ups (let’s pretend I am one of those) will appreciate the game for being well put together. Not only is it aesthetically pleasing, but it’s also a genuine joy to play.

There isn’t much of a downside to Whalien. There’s a little bit of jank to some objects, as things hook on each other pretty easily. Thankfully, you can fix this by using your mastery of The Force to push them out of the way or pull them. It’s a little challenging to maneuver single objects due to the inability to target one thing, but it really is a minor gripe. It didn’t detract from my experience in the slightest.

In fact, you could say I had a WHALE of a time.

Whalien is available now on Steam.

Whalien Review – All Aboard the Slime Ship!
Summary
Pros
Fantastic art style
Great sense of humor
Gameplay is a home run
Cons
It's a little short
9