Farming and life sims have always been popular, and Hokko Life is the latest in the genre. Likewise, Animal Crossing has been a popular franchise for years. Games like Stardew Valley and Slime Rancher have captured a new generation of gamers who want to pretend they work on a farm surrounded by whimsy instead of a retail job surrounded by the unending march of capitalism.

With this genre of games, many have similar premises and mechanics. As the player, you start slowly building your skills and cash until three days later, you own a palatial estate and marry the local clinically depressed person. Of course, there’s nothing wrong with using popular games as a template or inspiration. Just make it your own and ensure it stands out in the crowd. Some games like Stardew Valley and Slime Rancher have excelled at this. Then there is Hokko Life.

I played Hokko Life on the Nintendo Switch. It’s also available on Steam. I mention this because the two platforms have very different reviews, with Steam touting it as fair to good, while the Nintendo Switch reviews were less kind. I know why now. With that little qualifier out of the way, let’s discuss Hokko Life, shall we?

Hokko Life begins when you eventually complete a train journey to your new home, where adventure awaits! I say eventually because the loading time for this game on launch is frankly insane. Upon my first time launching the game, I sat and stared at the load bar as it slowly inched forward toward completion. Oh, how I waited. I thought, “This is fine; it’s probably just an initial load, and from now on, it won’t take so long.” Unfortunately, I was incorrect in my thoughts. It happens every time you open the game.

After arriving at your destination, you gleefully bound up some stairs and into a local inn, where you meet your first townsfolk. Your smile falters as you are greeted by what is clearly a woman dressed in an elephant mascot suit. Also present is a moose man. You think again, “Oh, this is fine. They are having some kind of fur suit meet up, no problem.”

They are kind and offer you a room for the night. You accept, and the next day your new friends, still in their unsettling animal costumes, say you can live in one of the vacant houses in town. 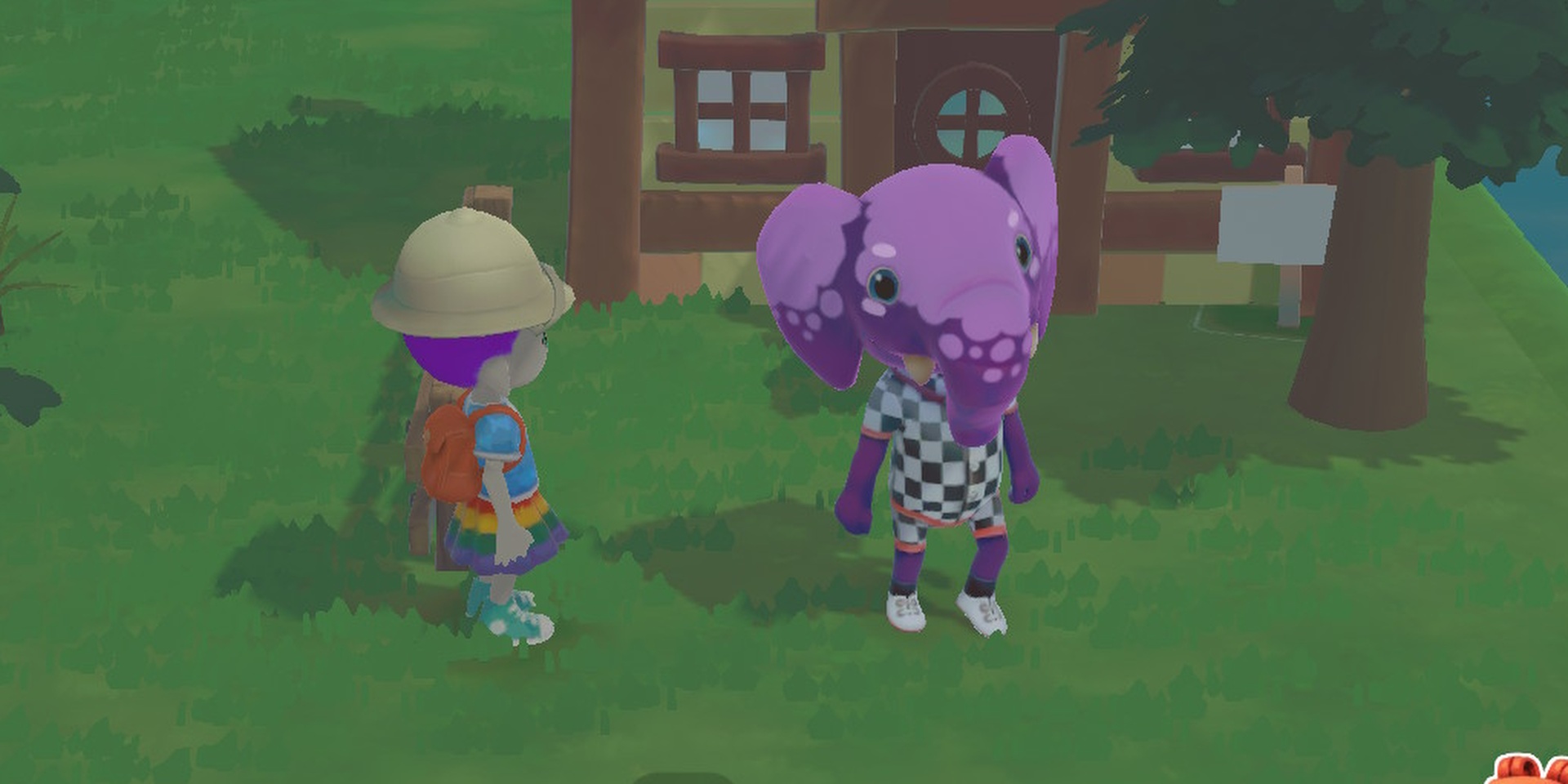 Soon it becomes clear that you have stumbled into some kind of quaint furry community where they live in peace in their fur suits, unbothered by the judgment of others. They accept you and give you a place to live for free. All they ask in return is that you become their indentured servant. There may not be a bell-hungry Raccoon running the place, but there is still a price to pay.

One task requested by a polar bear resident required me to design a chair from scratch out of stone. So, I went to the workshop to create a stone chair, which took too long because of how awkwardly it controlled. When I returned to the accursed creature, it rejected it, saying it wasn’t good enough. I should apparently spend more time on it.

If this was real life and I had just spent a day literally carving a chair out of stone from scratch for someone and they said that, I would suplex them. As dusk fell, I returned to the workshop, improving the design of this throne for the exacting polar bear. Finally, I returned to the miser; the Neanderthal stone carving was presented before him.

I long to torch the abode I had built for you. See you in the morning. I expect you’ll want a Faberge egg. 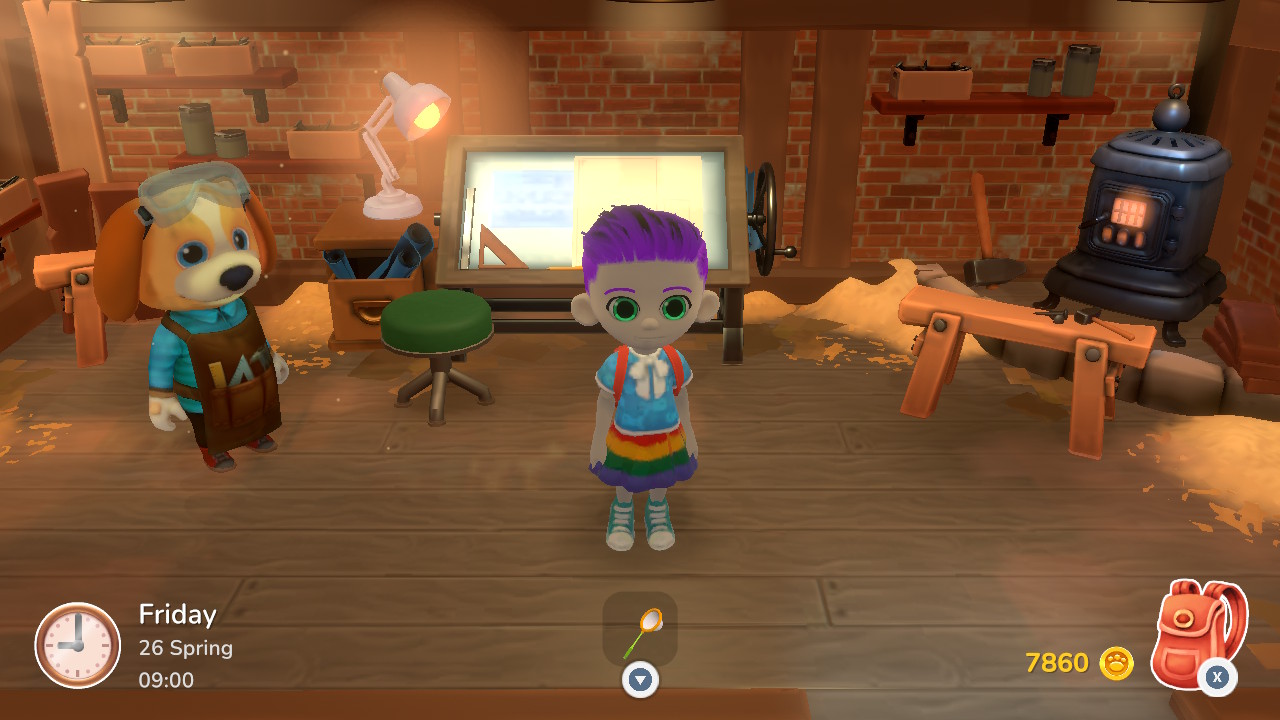 Yes, Hokko Life is an Animal Crossing clone. There are also some elements from Stardew Valley mixed in. For example, when you finally learn to fish, there is a mini-game that is extremely similar to the Stardew fishing mechanics to complete before reeling in your fishy friend. As I said at the beginning, there is nothing wrong with basing your game on others in the genre. Unfortunately, there is no charm to Hokko Life. The glassy, dead eyes of the townsfolk stare through you as you offer them gifts. Despite being lovingly crafted with materials you have gathered, they are mostly indifferent.

Now we come to the actual gameplay. There is no guidance in Hokko Life. The game rarely tells you what to do, how to do it, or where to go. To advance, you must pay close attention to the merit section of your inventory menu. Certain things are only unlocked once you have completed the achievements listed there. Again, this is not necessarily a bad thing and is often a common feature in this type of game. The problem with many advancements in Hokko Life is the lack of clarity. I don’t want my hand held by any means, but a little pointer in the right direction would be nice.

Along with these issues, the Switch version is glitchy and slow. When you catch a new fish or insect, your character stands frozen, staring blankly up at you while waiting for the compendium of creatures to open and add the newest one to its pages. Insects frequently fly through houses. Things get stuck. Worst of all, I discovered that to escape the dead-eyed stares of the townsfolk, I could walk into the waterfall and merge with it. I did not need to go chasing the waterfall; I could become it. 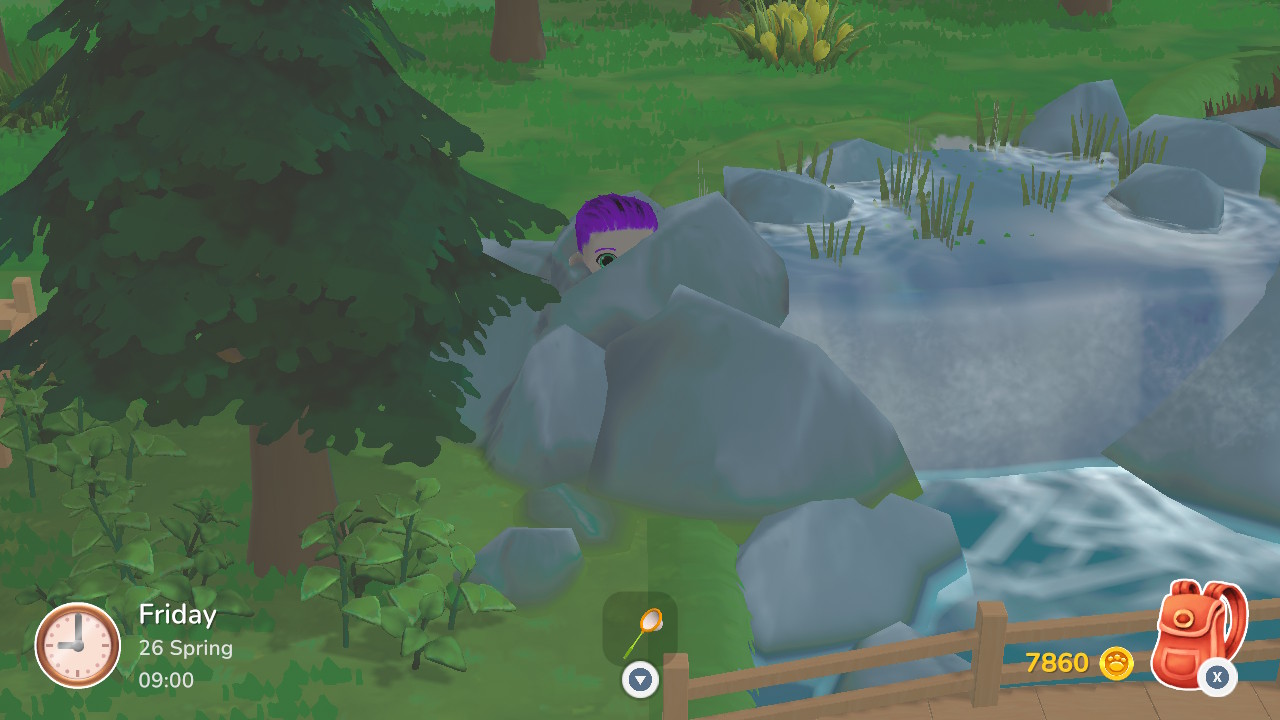 When it comes to crafting, it’s a fairly standard system. You collect materials, head to the workbench in the workshop, and craft the object. New plans for things are available to buy from workshop owner Sally, and more unlock as you progress through the game.

The issue is when designing your own things on the drawing board. I don’t know if this is my arthritis talking, but it is unbearably fiddly and unresponsive. In fact, this goes for anything in the game that requires precision. For example, digging a specific square becomes a chore as the grid square hops and jumps around the patch you want to dig or plant before finally landing on it.

The worst bug I encountered in the game was an early one. I just didn’t know it at the time.

After you unlock the raised area in the town, you find a stone set of stairs leading to more unlocked areas. One of these areas is cut off with the need for a bridge before you can reach it. When you approach the area, you automatically unlock a log bridge recipe. Awesome! You just have to craft the bridge, prepare it, and return to place it.

I took the bridge out of my bag and tried to place it over the gap. But, no matter how I moved it or flipped and rotated it, the grid remained red. Clearly, there was something else I had to unlock before I could do this, but what? 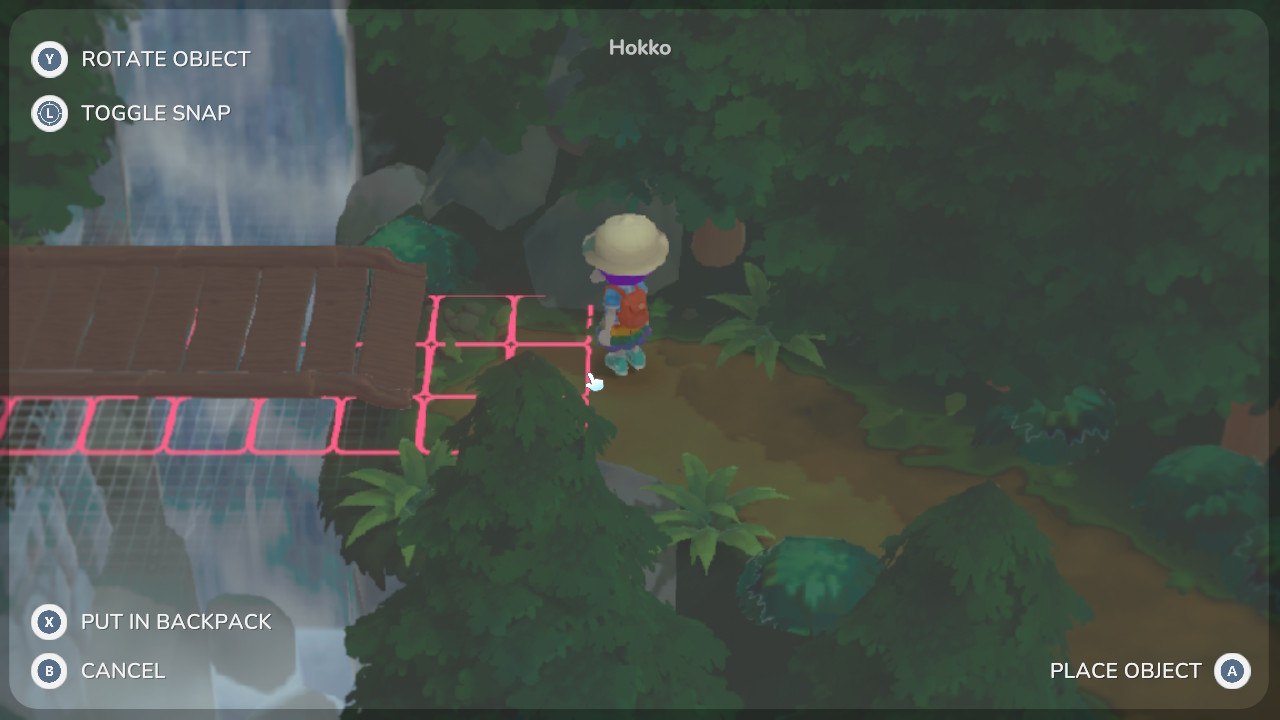 There was nothing I needed to unlock. So finally, after almost a whole Spring season in the game with most other areas unlocked and still unable to place the bridge, I resorted to Google. One of the first things that came up in autocomplete when I typed Hokko Life was “Hokko Life bridge.” It turns out it is just INCREDIBLY fiddly. You have to rotate the bridge to get it to place, but it depends entirely on the bridge’s whim.

I had already tried several times during my play time to place the bridge, rotating and adjusting its prospective placement. This time I stood on the precipice, rotating and changing the position back and forth. I imagined my avatar screaming into the chasm, the frustration echoing back. Finally, the grid went white. The bridge was placed. The Small Wood was now open to me.

Hokko Life is a frustrating experience. I can glimpse a fun game buried in there. I can overlook the art style, which is not bad; it just isn’t for me.

What I can’t overlook is the lack of clarity the game provides. The controls are frustrating, picky, and frankly annoying. The dialogue is stilted, lacking emotion and charm. I don’t like my neighbors in this town. I don’t want anyone to move in. No, I don’t wish to marry the belligerent polar bear who hates my hand-carved stone chair.

Hokko Life Review – Mammals Passing
Summary
Hokko Life tries to follow in the footsteps of Animal Crossing and Stardew Valley, but it trips over its own two feet almost immediately.
Pros
It's trying its best
The art style isn't terrible
Cons
Incredibly buggy performance
Zero sense of direction or guidance
An experience so frustrating it will cause emotional breakdowns
4